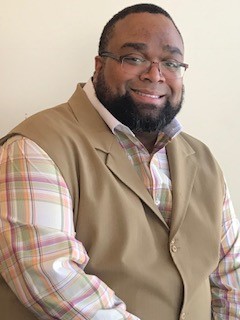 “The mission of the Kingdom of God is much more than the salvation of the human soul, but the opportunity to live in the total vision, purpose, and plan of God for the life of all people who believe”.

Dr. Charles W. Ferguson gave his life to Christ at the age of 10.  He was licensed on February 13, 1998 at the Mount Olivet Baptist Church in Columbus, Ohio.  Pastor Ferguson was then ordained at the Christ Memorial Missionary Baptist Church on December 28, 2008.

Dr. Ferguson is a 2000 graduate of Columbus East High School. He graduated from Kentucky State University in 2005 with a B.A in Business Administration with a concentration in Marketing.  He continued his studies receiving a Masters of Divinity degree in 2010 and a Masters of Arts in Counseling Ministries in 2013 from Methodist Theological School in Ohio.

On May 20, 2016 Pastor Ferguson was conferred a Doctor of Ministry degree from the United Theological Seminary in Dayton, OH. His area of concentration was Prophetic Preaching and Effective Church Leadership in the 21st Century. The title of his project was “Equip, Empower, & Educate: Uniting the Church Under True Biblical Leadership.”

His Roles in Ministry

Dr. Ferguson has served in several roles in ministry. He is the former Pastor of the Pleasant Grove Baptist Church in Springfield, IL and Second Baptist Church in Circleville, OH (2008-2013). He also served as an Associate Chaplain for Mount Carmel Health System.

Throughout his ministry and scholastic career, Dr. Ferguson has been preaching and teaching around the country.  He has received a variety of awards and served in many different capacities including Radio Host, The Praise and Worship Hour, WTMH Internet Radio (2011-2012); Class of 2010 Baccalaureate Speaker, Methodist Theological School Ohio (2010); Nystrand Award for Excellence in Homiletics, Methodist Theological School in Ohio (2009);  and Planning Committee, Christian Leadership Training Conference, Kentucky State (November 2001).

On August 18, 2012, Dr. Ferguson married his best friend and soul mate, Myrissa K. Ferguson. In July 2014, Charles and Myrissa welcomed their first child, Charles Jeremiah Ferguson into the world. Dr. Ferguson believes in the Kingdom agenda that God has prepared for His people and this world.

Dr. Ferguson recently released his first book, “Led to the Stream: Refreshing in Life’s Valley.” The project introduces a new paradigm to addressing valley moments in life, service, ministry, and beyond.

Click here to purchase “Led to the Stream” online.